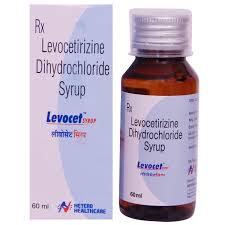 Levocetirizine is an antihistamine used to relieve allergy symptoms such as watery eyes, runny nose, itching eyes/nose, and sneezing.

Either in single dose of 5mg or divided 2 doses

Albendazole 200mg/5ml Albendazole is an antihelmintic or anti-worm medication. It prevents newly hatched insect larvae (worms) from growing or multiplying in your body. Albendazole is used to treat certain